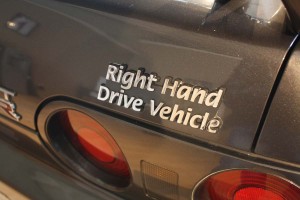 Nissan has a few sources to thank for that; video game franchises like Gran Turismo and Forza Motorsport for featuring many different versions of the car (it traces its roots to Nissan Skyline models from the late 1950s), tuning magazines the world over and in North America, men like Mike Kent, who has been bringing the 2013 GT-R’s ancestors to our shores since the mid-2000s.

You see, this latest GT-R (the R35 to some) is the first generation of the model to be sold at Nissan dealerships in Canada. All cars before it have been making their way to our shores via importers like Kent, who owns Right Drive, a vehicle importer and dealership in Vaughan, ON specializing in right hand drive Japanese domestic market (JDM) vehicles.

Kent cites a specific Canadian federal regulation for the proliferation of these right hand drive vehicles on our shores. It states that any car older than 15 years is allowed into the country without having to pass the Federal Motor Vehicle Safety Standard (FMVSS) crash testing. It’s also considered classic or collector vehicle, leading to lower insurance rates.

But those regs have been around since the 1960s—what’s really changed and led to more JDM models on our shores is the fact that the latest cars from Japan are just so…cool.

“20 years ago, importing a 1976 Honda Civic wasn’t very cool,” says Kent. “But as time went on, getting a 1996 Civic SIR II (a high-performance Civic model available only in Asian markets) all of a sudden became cool.”

Adding to the popularity is the world economy, and Japan—whose economy has struggled as so many others have in these recent years–is a major exporter of all types of goods.

“(The Japanese) have manufacturers galore, and the export business is very high,” says Kent. “They also have a very high population in a small area that’s buying cars.”

He goes on to explain that they are also a car crazy group and since buying incentives on new cars are so high in Japan, it’s that much more attractive to trade your old car for  new one. That leaves a lot of perfectly serviceable old cars ripe for export (most of Japan’s populace—and its cars–are in the south, where the weather is mild and not hard on cars).

Of course, there are a lot more folks looking for a practical car than for an AWD road rocket like a Nissan Skyline GT-R or a turbocharged rear-wheel driver like a Toyota Supra. As a result, Kent says that customers like that—who he calls “enthusiasts”—only make up about 2-3 per cent of his customer base.

Most of his customers, he says, come from the delivery and commercial sectors, from mail delivery to flower delivery.

Many of the reasons for RHD vehicles being popular in the city delivery sector are safety-based; owners get to step out of their car and directly on to the sidewalk as opposed to into traffic, for example. Even cars that can be bought in Canada like the Honda CR-V or Odyssey minivan are being bought in RHD form through Kent because of the advantages they provide.

The cars are interesting, too—how many times do you see a RHD Subaru Sambar kei van on the roads? Not that often, but when you do, chances are you’re going to stop and stare. It’s small, funky looking and just so…different.

On top of that, many of these vehicles are also powered by tiny diesel engines and Kent says that his customers are reporting 60 miles to the gallon, or about four litres per 100 kilometers in the city.

“So not only are you saving money on fuel, but you have this unique, kitsch little RHD machine that you can throw advertising on.”

An anecdote Kent likes to share is a story he heard from one of his customers, whereby a bunch of passers-by stopped to look at his little Subaru RHD van as opposed to the Ferrari 458 Italia that had pulled up beside him. All this when that Ferrari was brand-new and an exceedingly rare sight on Canadian roads. The customer? Well, he was admiring the Ferrari, of course.

If there are any worries about getting these cars certified in Canada, know that if you buy your car from a reputable dealer like Right Drive, all the DOT certification—daytime running lights, proper tires, child safety latches and so forth—will come as part of the cost of buying the car.

So that’s what it takes to buy one of these, and those are the benefits of owning one, but how are they to drive on Canadian roads where LHD is king?

To find out, we took an example of these out for a spin.

Our tester as the Mitsubishi Legnum, basically a station wagon version of the full-size Galant sedan, which we no longer see in our fair country.

Powered by a twin-turbo’d six-cylinder unit and all-wheel-drive (a Mitsubishi staple, really), it’s a zippy enough little thing, if one that is a little tough to extract the most of thanks to the auto transmission.

But we aren’t here for a road test; we’re here for more of a drive test, to see what one of these right-drivers is all about.

Going in, I though left-hand turns in traffic would be the toughest to negotiate, but I was wrong; in fact, they’re actually easier sometimes since you can see behind the oncoming cars for a glance at what’s coming.

In fact, it was on the straight-and-narrow that I found more challenging; as someone who’s used to sitting on the other side, I found myself floating into the lane to my left because subconsciously, I felt like I was drifting onto the right-hand-side shoulder.

The trick here is to remind yourself of your road position by checking the right mirror to get a better idea of where the shoulder is at; once you get that sorted, you start to become more comfortable.

Another challenge—and this may sound strange—is the indicator and windshield wiper stalks. The pedals are aligned the same way (clutch, brake, gas from left to right), but the stalks are on opposite sides, which means turning your wipers on when trying to change lanes, and vice versa.

Kent says that this remains the main challenge for anyone jumping into a RHD car, and once you get used to that, you’re well on your way.

Driving from the ‘wrong’ side: Right-hand-drive in Canada