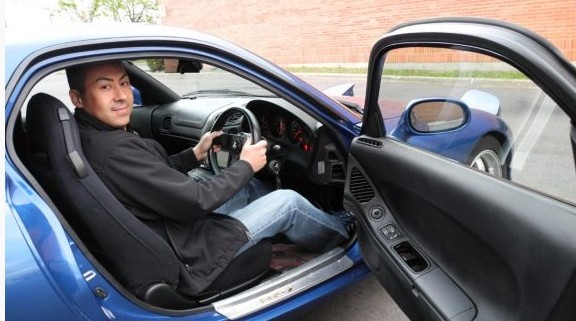 It so dominated the sport, the GT-R was banned from the Australian Touring Car Championship for making BMW owners cry.

The 1989 GT-R skulking around Bognar’s ’hood was not supposed to have crossed the Pacific. He followed it into a parking lot and approached the driver as he emerged from the passenger side of the car. True to form, it was a right-hand-drive car from Japan.

“This was the ultimate dream car of my generation; we all grew up playing the Gran Turismo videogame,” he recalls. Smitten, Bognar resolved to sell his V8 muscle car and seek out the importer of the GT-R.

That brought him to Michael Kent, principle of RightDrive.ca in Vaughan.

Established in 2007 with a paltry six cars, Kent — a former Speed Channel producer and drift racer — cultivated his used-car business into a multifaceted dealership that serves customers across North America.

“Japanese-sourced cars come from a climate that doesn’t vary more than 30 degrees, and the tax system there discourages driving, so many models arrive with low kilometres,” explains Kent. He recalls finding an old Toyota Harrier (Lexus RX 300 to us) with just 649 km on the odometer.

In Japan, vehicles are subject to mandatory inspections, called shaken, every two years to ensure they’re maintained to spec. Thanks to shaken — and the fact the average Japanese motorist drives 9,000 km annually — the vehicles that make it to 15 years are in remarkable condition.

Once in Canada, these imports must pass a rigorous out-of-province mechanical inspection and have to be altered to Canadian standards, including DOT-approved tires, brakes, fluids, daytime running lamps and child-seat latches.

Still, the nagging question involving right-hand drive vehicles is one of safety: how do drivers adapt to right-hand-drive (RHD) in a left-hand-drive (LHD) world?

One oft-mentioned study claims RHD vehicles are involved in 30 per cent more collisions, although Kent says jurisdictions such as Great Britain and Japan have large numbers of RHD and LHD vehicles co-mingling with no ill effects and no discernible difference in crash statistics.

“Ontario collision reports don¹t capture whether a vehicle is right- or left-hand drive,” points out Toronto Police Traffic Services spokesperson Clint Stibbe. “As a result, there is no way to say whether these vehicles are any better or worse on the road as compared to left-hand drive.”

As long as RHD imports meet federal and provincial regulations in terms of safety equipment and roadworthiness, police aren’t worried about them, says Stibbe. There is nothing unique about their ownership or operation that has caused concern for police.

Bognar says adopting to a right-hand-drive car takes little effort. The dreaded left turn is not really any more dangerous, no matter which side of the car you’re situated on, he claims.

“A big truck will obscure your vision in a left-turn lane, regardless. You just have to look all around, look further down the road and be aware of the whole situation.

“The most difficult thing for me is the turn-signal stalk being on the wrong side. I hit the wipers a lot,” he smiles. His unorthodox driving position caught the attention of police only once.

“I was stopped and asked for proof of insurance by a very polite and professional constable who told me it’s a known issue with these cars,” recalls Bognar, who produced the documentation and was sent on his way.

Acquiring insurance can be a challenge for owners of RHD vehicles. When Bognar bought his first GT-R in 2008, he found a willing insurer in Lant, which specializes in antique and collector vehicles. It¹s been more difficult to renew recently, though Lant has recognized Bognar as a repeat customer.

“Young drivers crashed their Skylines and soured the market for us,” says Bognar.

Kent admits arranging auto insurance has been a problem for some of his customers. He’s been working for three years to find coverage he can offer his buyers, and he’s rolling out a product shortly.

Hawking insurance is in keeping with Kent’s full-service dealership model, which markets sporty and classic Japanese domestic-market cars, as well as small commercial trucks, movie/television cars and postal vehicles. Prices range from $7,985 for a Honda Beat convertible to well over $20,000 for a high-performance car like the GT-R.

“We have a no-charge program that allows customers to order a desired model directly from Japan and buy on spec if we find one that meets their requirements,” says Kent, who has 25 to 50 people using the car-search service at any one time.

Eschewing the help, Bognar has traveled to Japan twice to locate hard-to-find models, like the Subaru Impreza WRX STi “555” special edition that marked Subaru¹s World Rally Championship wins. To his surprise, some dealers refused to sell it to him.

“There¹s pride in keeping the special vehicles in Japan and not for export,” observes Bognar. “It’s recognized that the golden age of Japanese sports models, from 1990 to 2002, has to be preserved. There’s a lot of collector interest now.”

The 37-year-old mechanical engineer has owned both a R32-generation GT-R and a GTS-T R33 Type M, which got turned in for the Subaru “555” edition — a model he traded up to the 1999 Subaru WRX STi Type RA, a track-ready limited edition he¹s certain will only appreciate in value.

As if that’s not enough, a 1999 Mazda RX-7 Type RS has also become his pride and joy these days. The lightweight coupe is coveted for its turbocharged 276-hp beer keg of a rotary engine that resides behind the front axle, yielding near-perfect weight distribution.

“You hardly ever see these around anymore; people bought them up and garaged them,” says Bognar, who says his Japan-market purchase put him ahead of investor interest. “The value of this car went up 20 per cent in six months.”

With five RHD Japanese imports under his belt, has Bognar sworn off of the Detroit iron that so enthralled him years ago?

“I¹m sure I’ll buy one again in the future, when I have more money and garage space,” he says, a little apologetically.

Driving from the ‘wrong’ side: Right-hand-drive in Canada